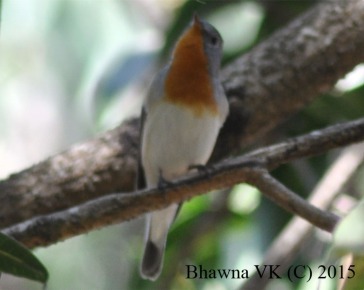 Who knew that a visit to the corner bakery would be an event in itself. On display today nearby was a fleet of cars lit by overhead lights. With my bakery package in one hand and the camera in another, I managed to get some pictures just before the show was wrapped up. There were a dozen of them. A 1947 Singer Roadster, all shining and gleaming. A 1951 Jaguar which looked as if it was born to rule the road. A 1969 Alpha Romeo. A 1967 Pontiac Firebird. And many more.It was a 1960’s-1970’s nostalgia journey. Event? A Classic Racing Auto Display. Thank God for good coincidences like this, I got much more than cream buns back tonight.

I missed visiting the flamingos again.
How ironic! They flew from miles, maybe thousands of them to be here near the Indian coastline, just fifteen minutes away from where i’m typing this post. And me… foolishly ignoring thier arrival and postponing it to the next weekend, one after another…missed them totally. It’s too hot now and i’m sure they are back on thier way home flapping thier wings in unison with thier curved beaks, in a straight line. But I do still hear the Golden Oriels and the family of Copper-Smith Barbets each morning, probably looking for a termite laden snack off our almost century old building.

They say the smells remind us of places because that area in our brain is close to the memory areas in our brain.The smell I’ll associate forever with Mumbai is that of the Jasmine Gajra. Jasmine is an unassuming white flower with a heady perfume.Women in southern states of India use a flower garland called “gajra” to adorn their hair. Going southwards towards the peninsula, the tied hair becomes a bun and the flowers change to a reddish pink. My earliest introduction to a jasmine gajra was in mumbai  almost three decades back. A short stroll at the Gateway of India had then brought us kids to the sights of vendors selling bangles and ladies selling jasmine gajras. To an average urban Delhi kid both were exotic novelties.The smell of the jasmine along with the intoxication of the rain is a faint but special childhood memory.

Today Gateway of India is hardly minutes away, but it closes at 10 pm behind a row of barricades, reminding me of the past that firmly tucked away. Went there just once after my first visit, but no jasmine in sight. Maybe they sell in the mornings?

Around 15 kms from Lonavala is Karla, a serene town famed for its caves said to be dated as old as 200 BC. I had promised in my last post about the Lonavala visit that I would blog about this next, but didn’t get to it till today. Editing visuals and deciding which ones to share, got a bit of an onerous task and then I finally decided that I’ll share more than a few today and make this a visual journey for you.

Karla caves are 4 kms interior into the town. After a winding drive uphill, the vehicle stops at a parking area and we proceed rest of the journey on foot, over a hundred steps up through a winding path, surrounded by souvenir shops on both sides. Some local women sell lemonade called “shikhanji” on the way and other paraphernalia for offering to the temple which is also situated there.

We didn’t stop but climbed upwards. After ten minutes climb we reached an open space with the caves and also an ancient temple next to it. You can’t take footwear inside the compound and another set of enterprising women had set up an open “shop” to deposit your footwear.

A local Musician dozing in the sun

The caves were everything I had imagined to be and much more. The inner sanctum was cool and quiet, the stillness only disturbed by the occasional gasps from the tourists or excited cacophony as the stone marvel was experienced. The Wooden rafters on the ceiling were interesting shaped and I wondered the sense of architecture that prevailed. 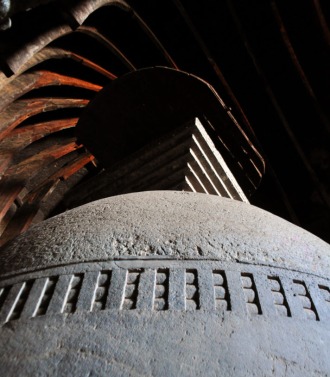 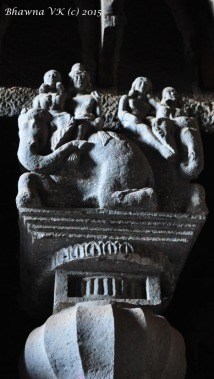 While all pillars looked identical, close observation revealed differences in the figures and orientation of the elephant. This visit was in my to-do list for a long time. I was intrigued to visit them after seeing a beautifully intricate print in the Museum , made in 17th century. This month, that image got to life and I got to touch the stones weathered over time, but intact in their position. 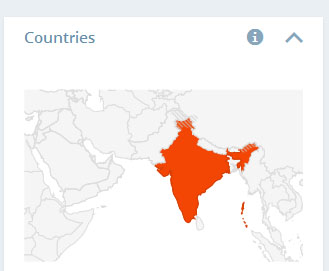 It’s enlightening to get a global perspective on Issues concerning India, but sometimes it just hurts what others think is or is not a part of India, the country to which I belong, along with a few billion others. If you look at the top of the map, I just got off the stats dashboard, you see that some top portions of India have been shaded with bands. WordPress seems to have put the entire state where I was born, Kashmir , as a disputed area? Along with part of north east which is the thriving state of Arunanchal Pradesh?

Below is the link to map of India from another site. This is the map we are more familiar with.

After having lived in tourist destinations for some years, I had long written off the idea of visiting another tourist destination nearby but eventually made a trip. It’s called Lonavala and it is around 2 hours drive from Mumbai. It’s a much favored spot for domestic tourists seeking respite in the hills from the neighboring cities of Bombay and Pune.

Lonavala has positioned itself as a Chikki destination. The market centre (not longer than 500 meters on road) is lined with shops selling Chikki on either side. Chikki is a hard sugar candy, generally in block forms. Peanuts, dry fruits and sesame are added to make different variations. Some enterprising shops have created figs based rolls, but we preferred the chocolate and strawberry fudge.

I wouldn’t go into the accommodation aspects, because we didn’t eventually stay here, but there are many little hotels and resorts along the road. A Mc Donald and KFC have also set up shop a little further from the market predominantly for tourists.

A Samosa ( potato filled local savory, usually had at teatime) lined for frying. 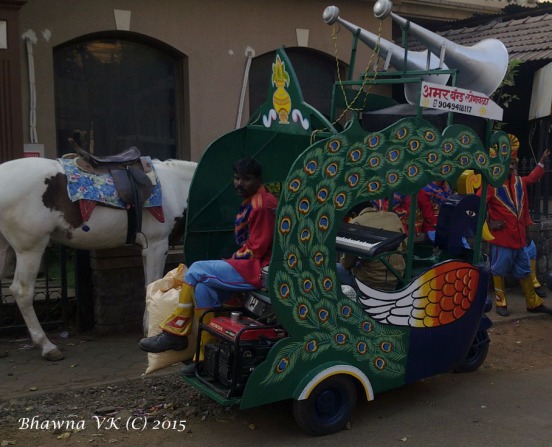 The band setup and “bandwallahs” for a marriage party procession. The bride groom will be riding that horse which you can see in the background.

A sadhu crossing the city centre. We don’t get many such sights in cities.

Tourism being the chief occupation of the locals, you’ll find many tours being provided to sight see nearby places. This was off season time. The best time to visit is during the monsoons as rivulets of water run over the hillocks dotting the scene with mini waterfalls.

I’ll write next about Karla, the place nearby, where we actually decided to stay.